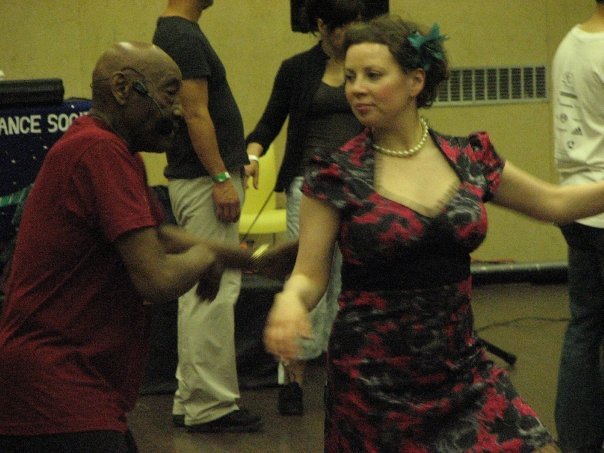 Before ever having seen him before, a few of us traveled to New York for his 85th birthday. Dan and Mark Hart were two of the people who still dance now, and Arthur who went up in a different car. For me, it was a very overwhelming experience. There were so many people there, and they were all there to celebrate the one great man who I had heard so much about but never seen. I hardly had a chance to see him at the event, but I do remember how everyone was given an individually wrapped sweet potato pie because that was Frankie’s favourite. I thought that was pretty cool.

About 6 weeks later I made my way to the Herrang Dance Camp 1999. My sister and I took the very long ‘scenic’ (lost) route to get there. When we got off the bus we were confused and exhausted and unsure what to expect. The very first people we met walking down the Herrang road were Frankie and Chazz. I recognized these big stars from my brief experience in New York and felt awe struck, but both of these gentlemen greeted as with casual warmth and friendly hellos. Their smiles were genuine and kind.

I will always love and remember how Frankie would call all the ladies “Baby” and all the guys “Jim.” If only I could get away with forgetting people’s names so smoothly.

I have many memories of hearing Frankie’s talks. Though some of the stories were often the same, it never ever mattered. What was so magical was Frankie himself. I wish I could have bottled his enthusiastic story telling to save for a rainy day. His talks made me so happy.

A couple of years ago I had dinner with Frankie and Chazz and Frankie began to tell us a story – I think that it was about playing basketball with Cab Calloway – Chazz exclaimed with surprise that he hadn’t heard that story before. I thought that it was so neat that Frankie was still remembering wonderful and amazing snippets from his many rich experiences.

Later on I had the very humbling privilege of teaching with Frankie on three different occasions. I say humbling because to stand before him, to have him take your hand and begin to lead you through even the most simple is nothing short of incredible. To swing out with him was perfection. Strength. Surety. Rhythm. Absolute clarity.

Recently I saw footage of myself teaching the first workshop with Frankie back around 2002. I felt so embarrassed to see how I danced then since I have come such a long way in my learning since that time. But I also remember how absolutely gracious Frankie was dancing with me at that first workshop, even if I wasn’t very good. I am so happy that I had the chance to teach with him one year ago as a much better dancer so that I could really appreciate all of the nuances of his skill.

What was amazing about Frankie is that off the dance floor or teaching floor I could really feel his age, but as soon as it was time for him to stand before an audience he would light up and turn on. It was like he would instantly lose 20 or more years. The most remarkable instance of this was when we had to wake up very early one morning to make a television appearance. It was so early and he was so tired. But just before we went to do the performance he went through his transformation. That short dance was absolutely amazing. I have never felt anything like that before or since. Every step, every second was absolute Lindy Hop perfection. I am obtaining that video footage this week and will try to post a clip of it soon.

These are just some of the random thoughts going through my head about Frankie this morning. I’m sure that I will have more to add to this note soon.

Thinking of you Frankie. I wish you could smell how glorious this is! We ar